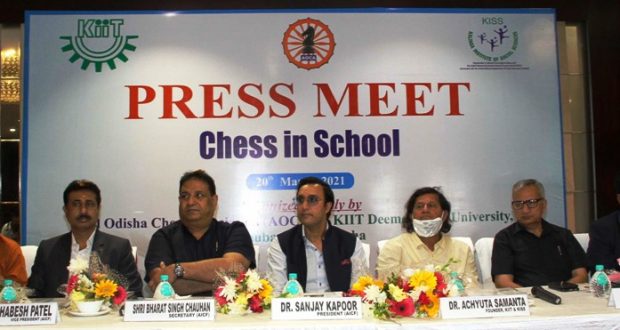 Following the International Chess Federation (FIDE)’s policy to include chess in school level study curriculum, the same is being executed in different nations across the world. In this context, All India Chess Federation (AICF) has also decided to include chess in school curriculum. Accordingly, AICF and All Odisha Chess Association (AOCA) have chosen Kalinga Institute of Social Sciences (KISS) as the first school for incorporating chess in its academic curriculum.

Bhagat Singh Chouhan, Secretary, AICF; Sanjay Kapoor, President; Bhavesh Patel, Vice-President; Narendra Sharma, Treasurer; Ranjan  Mohanty, President, All Odisha Chess Association (AOCA); and Debabrata Bhatta Secretary, AOCA declared at a press conference in Bhubaneswar that KISS would be the maiden venture in including chess in its school curricula. Such programs will be managed by the International Chess Federation, they said. While KIIT & KISS will provide the required infrastructure, FIDE & AICF will extend all sorts of cooperation.

In order to incorporate chess as a game in the academic curriculum, communication was being made with AICF by KISS for the last year based on the strength of its infrastructure, coaches, and facilities. In turn, envisioning initiating chess as part of the study curriculum in KISS, AICF communicated with Samanta.  As a leading promoter of the game, he gave a green signal to AICF. Subsequently, all arrangements have been made to include chess in the study curriculum of KISS from 2021-22 academic session.

Expressing happiness on this matter, Samanta has extended thanks to AICF and AOCA. Such an endeavor will enable many chess players of KISS as well as of Odisha to get international exposure, he said. Chess as part of the study curriculum will help the students immensely.