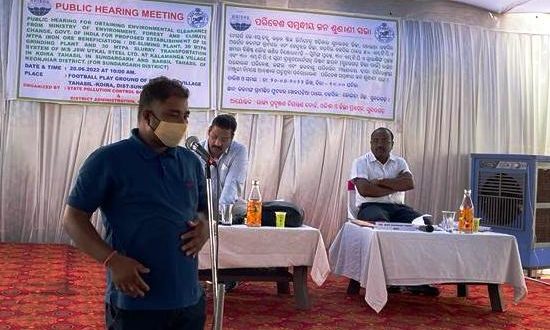 During a public hearing on Monday, most of the villagers from Kolmong extended their wholehearted support to JSW Utkal Steel for setting up a plant.

The public hearing was conducted jointly by the State Pollution Control Board (SPCB) and Sundergarh District Administration to receive environment clearance for the iron ore beneficiation plant at Kolmong in Sundergarh district.

About 2000 villagers from nearby villages were present during the public hearing. Most of the villagers expressed their views in the forum and supported the proposed project. The project is set to generate nearly about 300 employment opportunities in the locality.

“The local transporters would not be hit by the laying of slurry pipes as only lower grade iron ore fines will be transported through pipeline for maximizing resource utilization,” said Ashesh Kumar Padhy, Head, Projects (Odisha) JSW Steel Limited. The higher grade ore and iron lumps will be transported as usual via road, so there is no need for panic, he reassured.

Former MLA Bhimsen Choudhary and community influencer Anand Barik said that the future of people in the region is set to change for good with mega players like JSW foraying into the locality. Environmentalists in the locality opined that JSW is known for its people-friendly and environment-friendly approach and the company is taking up many futuristic endeavours in the area.

Meanwhile, the company’s officials assured the villagers for fulfillment of their demand in phased manner. “We will ensure local employment based on their eligibility for the project across various domains. There are 300 direct and outsourced employment opportunity in the project,” said BRK Padhi, Head, Mines.