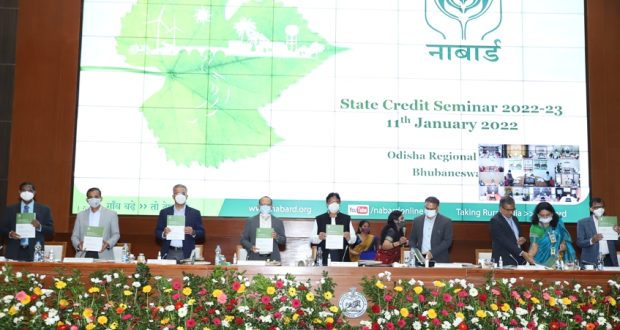 The Odisha Regional Office of NABARD on Tuesday released the State Focus Paper for Odisha, projecting an overall credit potential under Priority Sector at Rs.1,34,665 crore for the financial year 2022-23.

Welcoming the dignitaries, NABARD Odisha Region Chief General Manager C Udayabhaskar said that concerted efforts need to be made for achieving the set targets for the current year and increase the credit flow to priority sector. “NABARD has been increasing its support for the infrastructure development, tribal development, watershed development and micro entrepreneur development among SHG women; and will increase the developmental activities in the state,” said Udayabhaskar.

Congratulating NABARD for completing the Credit planning exercise, Minister Niranjan Pujari emphasized upon the need for increasing the Bank credit for Priority sector in Odisha as the Government has been pushing lot of support through various schemes like BALARAM, KALIA, SAMRUDHI, Millet Mission, FPos etc and it’s time for Banks to increase the credit flow for private capital formation substantially. “Activities such as Animal Husbandry, Poultry, Fisheries etc., leading to asset formation and diversification of the income basket of farmers need to be credit linked,” the Minister said. Government has been untiringly developing the enabling infrastructure in the state for the effective growth in agriculture sector and Banks have to push the credit for the economic benefits to percolate to the farmers, he added.

SLBC Convenor Jena indicated that by the end of the current financial year Banks have to achieve the set target of Rs.1.10 lakh crore and the current performance as at the end of September 2021 is not very encouraging.

RBI Regional Director Panda spoke about the historical reasons for the low bank credit in Odisha and asked Banks to be aspirational as Odisha is a growing as an aspirational state and should be having the highest CD ratio in the eastern region of the country. He said Banks may support IT sector to boost the credit flow and suggested that CD ratio need to be at least 75% for all districts.

Expressing happiness that Banks have been very positive in providing credit to the allied sectors such as dairy, goatery, fisheries etc, the AH & Fisheries Secretary said that there is tremendous potential for inland fisheries in the state and Banks have to aggressively push the credit flow to the allied sectors. He also suggested that for the year 2022-23 the outlay for Allied sector has to be much more than the projection. Further, he suggested that specific training in allied activities financing is essential for the young bank officers.

The Principal Secretary-Finance said that the credit flow from Banks to the priority sector in Odisha needs lot of urgent improvement and attention. The economy of Odisha could withstand the negative impact of Covid-19 and proved its resilience, he said, indicating that a five-year long-term planning exercise has been commenced for a structured development of the state. He called for removal of rural and urban disparity among the districts in terms of extending financial services and paving way for sustained development. He urged all Banks to achieve the set targets and increase the bar.

APC Sanjeev Chopra asked the Bankers and line departments to introspect, revisit the strategies required for upscaling the credit flow and for removing the operational impediments in the growth of credit to the priority sector. “BALARAM needs total relook and positive support from Banks,” he said.

Development Commissioner Jena said that Odisha has been growing faster and better and Banks have to improve the quality of lending. He advised all District Collectors who are Heads of DCC that all efforts have to be put to achieve the current year targets. He said demand needs to be created at grass roots level and KCC need to be broad based to support allied activities. He also said that start-ups also need credit and Banks have to come forward to support them.