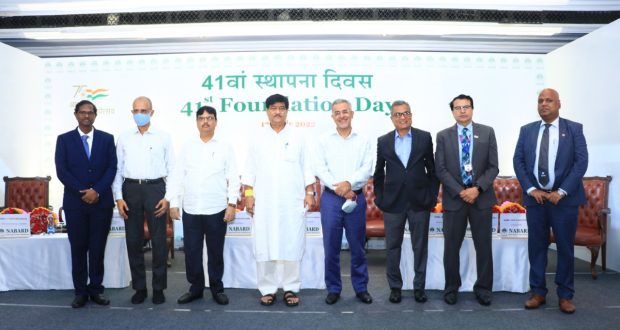 Lauding National Bank for Agriculture and Rural Development (NABARD) for its consistent endeavors, initiatives and contributions to rural development and constant support and active involvement in the development of rural sectors in Odisha, State Finance Minister Niranjan Pujari on Tuesday said that NABARD has been a major partner of Government of Odisha in its developmental endeavors.

He was speaking at a function organised by NABARD in a city hotel to celebrate its 41st Foundation Day.

Speaking on the occasion, State Agriculture Production Commissioner Sanjeev Chopra appreciated the efforts of NABARD towards irrigation, WADI, watershed development, support to agri-entrepreneurs and marketing which have boosted the economic growth of Odisha. He also elaborated on the active role of NABARD in the promotion of Farmer Producers’ Organizations in the State.

Appreciating the efforts of NABARD in providing handholding support to banks for increasing the Ground Level Credit Flow in Odisha, Panchayati Raj and Drinking Water Department Principal Secretary AK Meena urged all the stakeholders to double their efforts and work together to achieve the priority sector credit disbursement target of Rs.1.35 lakh crore in the current financial year.

RBI Regional Director HN Panda spoke about the importance of financial inclusion and appreciated NABARD for supporting banks for setting up of Financial Literacy Centres for creating financial literacy awareness among rural people.

Thanking the stakeholders for the excellent cooperation and support which has resulted in fabulous performance of NABARD in the State, Sharma said, “NABARD has been a major partner of Government of Odisha in its developmental endeavors.” NABARD’s financial support to the Odisha Government, banks and corporations in the State has touched Rs.31,786 crore in the financial year 2021-22, informed Sharma while indicating that the thrust areas for the current fiscal are remunerative activities beyond paddy cultivation, FPOs, developing micro entrepreneurs of successful SHG (self help group) women, doubling of bank credit to the SHGs, doubling of farmer’s income, climate change and promotion of handloom and handicraft OFPOs.

Individuals and institutions in various categories such as best performing tribal farmer, SHG, FPO, Watershed Management Committee, farmer under “Beyond Paddy”, weaver, craftsman, Swachh Abhiyan Initiative, and BALARAM Yojana were felicitated by NABARD on the occasion in recognition of their efforts in the various developmental initiatives of NABARD.

NABARD, the apex regulatory body for overall regulation of regional rural banks and apex cooperative banks in India, was established on the recommendations of B. Sivaramman Committee on 12 July 1982 to implement the National Bank for Agriculture and Rural Development Act 1981. The bank has been entrusted with “matters concerning policy, planning, and operations in the field of credit for agriculture and other economic activities in rural areas in India”.