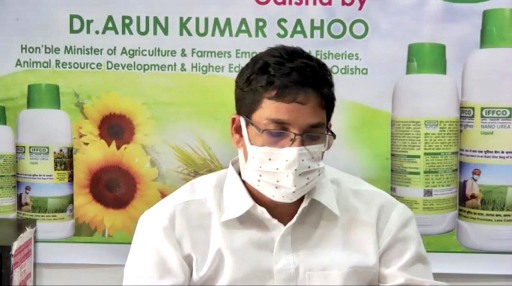 The use of Nano Urea will help increase farmers’ income, reduce input cost and enhance the quality of yield besides reducing the use of chemical fertilizers, said Odisha Agriculture Minister Arun Kumar Sahoo, while flagging off the dispatch of Nano Urea truck for the farmers in the state.

“Nano Urea (Liquid) will not only help increase the income of farmers but will also help solve the problem of Urea in the state. It is a very efficient product,” said the minister.

The truck containing Nano Urea (Liquid) was dispatched from the Kalol plant in Gujarat to Bhubaneswar.

State Agriculture Secretary Suresh Kumar Vashishth informed that Odisha would help in the outreach program. “Government of Odisha will extend full support to the innovative product and will create awareness about Nano Urea among farmers,” he said.

Speaking on the occasion, IFFCO Managing Director U S Awasthi said, “We will soon set up Nano Urea (Liquid) and NANO DAP plants and IFFCO Paradip will have the biggest Nano Urea plant.”

One half liter of Nano Urea bottle gives equal or better impact when compared to a bag of urea from the effectiveness perspective on crops. Because of its small size it is very convenient to be used by farmers in difficult terrains, he said.

Nano Urea has been tested on many crops and results showed that Nano Urea is very useful in increasing yield and also nutritional quality of the crops. It also helps reduce water and environment pollution thereby making the planet safer for the humans and other living beings.