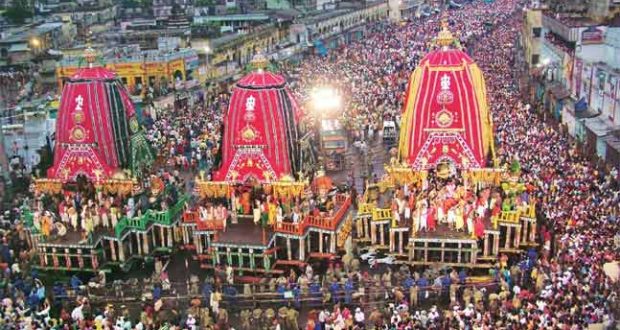 After a Covid hiatus of two years, the nine-day sojourn of the holy Trinity – Lord Balabhadra, Lord Jagannath and Devi Subhadra – started in the pilgrim city of Puri this morning with lakhs of devotees taking part in the world famous car festival, popularly known as Rath Yatra.

The rituals of the festival, popularly known as Rath Yatra, started early in the morning in Shree Mandir, Puri.

After some rituals inside the temple, Lord Balabhadra, Lord Jagannath and Devi Subhadra and Lord Sudarshan were taken out of the temple in a grand procession – known as Pahandi – to their respective wooden chariots placed in front of the Lion’s Gate.

Then Gajapati Maharaja Dibyasingha Deb performed chhera pahanra (sweeping the chariots with golden broom) after which the chariots were pulled by the devotees to the Gundicha Temple.

The Trinity, on reaching Gundicha Temple, will be taken into the temple in a grand procession and stay there for seven days before starting Their return sojourn known as Bahuda Yatra which will take place on July 9.

The Odisha Government has made elaborate arrangement for smooth conduct of the Rath Yatra.