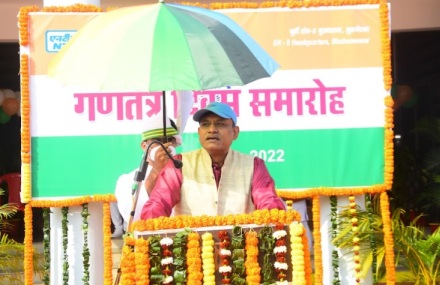 The NTPC Eastern Region-II Headquarters joined the nation in celebrating the 73rd Republic Day with patriotic fervour, here on Wednesday.

Speaking on the occasion, Goswami recalled the gallant contribution of our national leaders and freedom fighters who secured freedom for us by paying a hefty price of sacrifice and years of struggle. “This is a historic day when our Constitution came into being in 1950 and our nation was declared a ‘Republic’,” he said.

He urged the employees to carry the glory of our nation into their lives as NTPCians. NTPC has significantly powered the nation on its path of progress; and is now trying to beat its feat by aiming to become the best power utility in the world and this would not have been possible ever without the active contribution by each of its members.

He also spoke about the achievements of ER-II in general and projects/units in specific.

Goswami urged all employees to continue to critically examine, think innovatively and consciously and collectively address the glaring issues that the NTPC is facing at the moment. “Being in a premier Maharatna PSU, we have added responsibility towards the development of the nation,” he said.

Goswami called upon everyone to work together towards the larger cause of sustaining the competitive advantage of the company and the development of the nation. He urged the employees of ER-II to come forward and contribute their best and make this year a year of pioneering effort by ER-II HQ members.