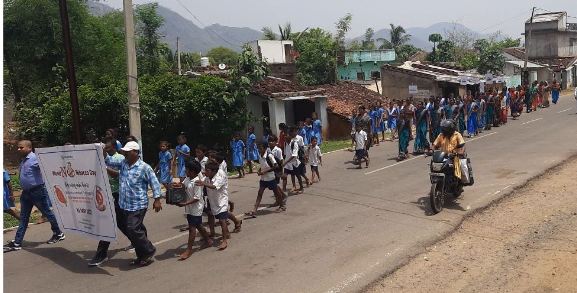 While the adverse effects of consuming tobacco are well documented, millions continue to be affected by it each year. This is due to the general lack of awareness among tobacco users about its far-reaching consequences on their health and productivity.

Vedanta Lanjigarh held an awareness session at the Upper Primary School in Champadiepur, today, in line with the theme ‘Tobacco is killing us and our planet’. Community members, including school children, participated in the session, which highlighted the various risks associated with tobacco use and the detrimental impact of tobacco cultivation on the environment. The awareness session was followed by a public rally featuring the enthusiastic participation of the students and community members.

Speaking about the initiative, Vedanta Limited, Lanjigarh Deputy CEO GG Pal said, “We are working on multiple fronts to bring about a positive transformation in the quality of life of the residents of Lanjigarh. Our deep interventions in community health continue to impact thousands every year. The anti-tobacco campaign brings together local government, community leaders and decision makers in participative action to drive sensitization on the ill-effects of tobacco. The initiative seeks to enhance health outcomes through a preventive approach, while also inducing a wider behavioral change focusing on a definite reduction in the consumption of tobacco.”

Addressing the gathering, Chief Medical Officer of Vedanta Hospital at Lanjigarh, Dr. Akshay Sahoo, said: “Tobacco consumption is an addiction that affects not just its consumers, but also their loved ones who need to deal with its devastating consequences in the long term. This awareness session aims at sharing this message with young students and community members early in life so that they can avoid developing this habit and proactively make positive choices about their health.”

The Vedanta Hospital is a state-of-the-art multispecialty facility at Lanjigarh (Kalahandi), provides medical care to 60,000 residents from nearby villages.

Vedanta Aluminium, a business of Vedanta Limited, is India’s largest producer of aluminium, manufacturing more than half of India’s aluminium i.e., 2.26 million tonnes in FY22. It is a leader in value-added aluminium products that find critical applications in core industries. Vedanta Aluminium ranks 4th in the Dow Jones Sustainability Index (DJSI) 2021 world rankings for aluminium industry, a reflection of its sustainable development practices. The company operates a 2 MTPA (million tonnes per annum) capacity alumina refinery at Lanjigarh in Kalahandi district of Odisha since 2007 and an associated 90 MW captive power plant.  With its world-class aluminium smelters, alumina refinery and power plants in India, Vedanta Aluminium fulfils its mission of spurring emerging applications of aluminium as the ‘Metal of the Future’ for a greener tomorrow.