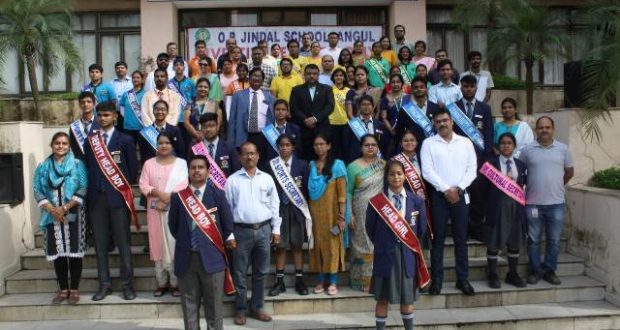 OP Jindal School, Angul conducted the Investiture Ceremony of the senior and junior wings of the school conferring Student Council positions and presenting badges and sashes to the elected representatives.

Conveying his best wishes to the newly elected members of the School Council, Jindal Steel & Power (JSP) Executive Director Damodar Mittal encouraged them to be diligent, sincere and honest in all aspects of life. He said that the student council has been formed for the development of the qualities of discipline, conscientiousness, sense of responsibility, respect for others and unparalleled reverence for the constitution of the country.

Gracing the occasion on the first day of the ceremony, Santanu Sar, former Principal Govt. Autonomous College, Angul, in his address motivated the newly elected members to discharge their responsibilities in a fair, dignified and righteous manner.

Former President of Board of Secondary Education, Odisha Dharanidhar Nath graced the occasion on the second day along with Jindal Mahila Samiti President Anita Mittal. Nath encouraged the future leaders to maintain their integrity and austerity while acting as true leaders. Congratulating the student leaders, Anita Mittal motivated them to passionately pursue their responsibilities.

Principal Rath spoke about the five essential ingredients – Attitude, Believe in self, Creative & Confident, Diligent, and Energetic & Efficient – for success in life.

Master Raman Raj Srivastava and P Anvesha Kiran were appointed as the Senior Secondary Head Boy and Head Girl respectively; and Master Reyansh Vashistha and Sukirti Pragya Nayak were appointed as the Primary Section Head Boy and Head Girl respectively. The young leaders took oath to fulfil their responsibilities and stay strong to their commitments.

All teachers, staff and parents of the elected students along with the students of classes 6 to 12 joined the programme.