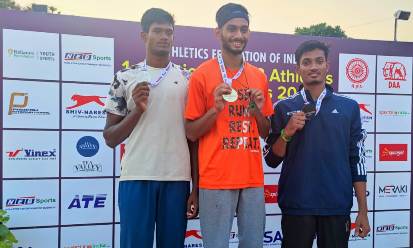 Eight athletes from the Reliance Foundation Odisha Athletics High Performance Centre (HPC) based at the Kalinga stadium in Bhubaneswar registered a 11 Personal Best (PB) timings at the Under-23 National Athletics championships in New Delhi last week.

MD Alamgair Hossain in the 400m, Moumita Mondal in the 100m hurdles and Swadhin Majhi in the High Jump returned with bronze medals, capping off a memorable season for athletes from the HPC.

At the Open Nationals in Warangal preceding this competition, Amlan Borgohain had won Gold in the 200m and Silver in the 100m, also with PB timings of 20.75 seconds and 10.34 seconds, respectively. The performances in New Delhi further underlined Head Coach James Hillier’s vision of creating a program that allows athletes to make steady progress up the ranks.

“I was most impressed by how well the athletes prepared and how calm they were under performance pressure,” said Hillier. “Athletics is about the right performance at the right time and for them all to peak and get PBs at the nationals was so pleasing for me. I feel that we are always the best prepared athletes at the various competitions we compete in with a physio, a nutritionist and a performance mindset expert at hand to guide our athletes before and after races.”

Among the medal winners, Hossain produced the most remarkable sequence of results at the competition. Starting with 48.13 seconds in the heats, he clocked 47.57 in the semifinals and 47.20 in the final, to register three consecutive PBs. MD, as he is called by his fellow athletes and the coaching staff, joined the HPC 18 months ago and has since improved his PB by well over a second.

Mondal was equally impressive and in fact led at the halfway point in her race, only to be beaten by more experienced athletes to the finish line. Her PB of 14.05 seconds in the final is also a considerable improvement on the 14.56 when she joined the HPC in April this year.

Majhi’s jump of 2.08 metres to pocket the bronze wasn’t just his PB but also a new Odisha state record.

“I have worked very hard with MD Almagir on pacing the 400m correctly,” explained Hillier. “I knew he was capable of running as fast as 47.20, in fact this was his exact target that I had set him for the year. It was just about execution. After a disappointing Open Nationals performance, I felt that I was not empowering him or trusting him enough to ‘run his own race.’  So, I changed my approach with him for this competition and tried to minimise any tactical talk prior to the race.  Thankfully it worked and he got three PB’s in three races.”

“Moumita has improved by over half a second since joining the HPC just under 6 months ago. My main goal with her was improving her speed between the hurdles and technically getting her to speed up her trail leg by shortening her leg levers,” he added.

“As for Swadhin, he did amazingly well to win his first national medal. The big focus for him was to get significantly stronger in the gym, improve his running and his take off position related to the bar. He has improved from a PB of 2.01m to clearing 2.08m in his last two competitions.”

Other athletes from the HPC, a collaboration between the Odisha Government and Reliance Foundation that began operations in 2019, also continued their impressive strides forward at the competition. In the Long Jump, Sabita Toppo, who won Gold at the Junior Nationals in Guwahati earlier in the year, registered a PB of 5.85 metres to finish a creditable sixth, convincing Hillier she remains a “hugely bright prospect” for the future. Graceson Jeeva, who won Silver at the Junior Federation Cup in Patiala in August in the 100m hurdles, was the youngest athlete in the field at just 18 and finished fifth with a PB of 14.73 seconds.

In the 200m, another bright prospect, Aryan Ekka came extremely close to qualifying for the final. Ekka has improved his PB four times this season, dropping down from 22.44 seconds to 22.04 seconds and also at just 18, the experience of competing against much more experienced athletes at this competition will hold him in good stead for the future.17-year old Susmita Tiga, who was competing for the first time outside Odisha and was at her first National level championships, decimated her previous PB of 12.01.76 seconds in the 3000m Steeplechase to come in eighth in a time of 11.46.21 seconds. Nikhil Das, also just 18, equalled his PB of 1.90m in the High Jump to gain valuable experience of competing at the national level. Back at the HPC now, Hillier is giving his wards some well-earned rest at the conclusion of a hectic competition season before getting them back to training mode.

“From the first week of November we will start our formal preparations for the 2022 season,” says Hillier. “Each of the 16 athletes in the HPC will have an individual ‘road map’ which will be a plan for the whole season with their main competitions highlighted.  I am a coach that likes to train the athletes for specific competitions as I like them to peak at the right time.  So, it is very important that before we start the training year that we all know what we are shooting for exactly. Ultimately, I would like to get these athletes some international experience and hope that they might be able to compete for India in due course.”