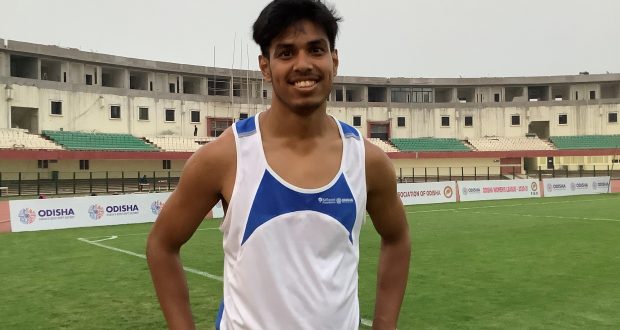 The 24th National Federation Cup in Patiala earlier this month has provided the coaching staff at the Reliance Foundation (RF) Odisha Athletics High Performance Center (HPC) in Bhubaneswar further confidence that the meticulously crafted programme for athletes under their wing is on the right track.

Two athletes from the HPC – Amlan Borgohain in the 100m and Dilip Naik in the 800m and 1500m – participated at the competition, and both returned with Personal Best (PB) timings.

22-year old Borgohain, one of the youngest participants in the competition, recorded two PBs – 10.59 seconds in the heats and then 10.44 seconds in the semifinal. These efforts topped his earlier PB of 10.68 seconds, achieved at the qualifying competition for the World University Games at the Kalinga Stadium in Bhubaneswar, in the week prior to the Federation Cup. Borgohain is currently ranked third in India and second among athletes eligible for the World University Games scheduled for August 2021, and Head Coach James Hillier is convinced he will be chosen for the 100m as well as the 4 x 100m relay when the national selectors name the squad in April.

“Our original race-plan for this season, based on the annual plan we made for Amlan at the start of the year, was to open his season in June,” explains Hillier. “However, we decided to expose Amlan to compete at the Federation Cup at the last minute due to the fact that the data we were getting from training suggested that he was in better shape and in better physical condition than we thought he would be in when he started training for this season back in January. So, after just 10 weeks of preparation and no specific race preparation, Amlan competed; and recording two personal bests was very pleasing for him and the whole performance team.”

Borgohain has been one of the standout successes of the HPC, established collaboratively by the Odisha Government and Reliance Foundation, with the aim to improve the standard of athletics across the state and the country and produce home-grown athletes who can achieve national and international success.

“We are indebted to the Odisha Government who have supported this project right from its inception and have helped us create one of the best training facilities in India here at our base in Bhubaneswar. Amlan has truly benefited from the expert coaching, sports science and medical support that he has access to at the HPC,” says Hillier.

“Bhubaneswar is clearly emerging as the best place in the country to train for athletics and Amlan is able to flourish here,” he added.

“Before I came to the HPC, I had no clear idea of how to train properly,” admits Borgohain. “Now, every aspect from nutrition to strength training to technique is handled by domain experts and it is explained clearly to us. I have learnt that when the mind accepts the training methods, the body follows. Earlier, I would feel a sense of fear before competitions but now I feel excited, especially as I know I am very well prepared because of the work we have done with the coaches and support staff before the competitions.”

Local boy Dilip Naik, who hails from the Nayagarh district in Odisha, is another athlete whose journey is being planned with precision. Naik, who is still only 19, used the experience of running with older athletes at the Federation Cup to his advantage by running a personal best of 1:54.65 in the heat to finish sixth. In Hillier’s assessment, based on the training data he has received, Naik is capable of running significantly faster.

Powered by the learning from the Federation Cup as well as the Junior Nationals in Guwahati in February, where athletes from the HPC returned with three medals, Hillier and his team will now return to the training regimen ahead of the next competition, planned for June.

While not setting medal-specific targets, Borgohain is focused entirely on consistently improving his timings to be in contention for a place in the Indian team for the 2022 Commonwealth Games in Birmingham. With the HPC operating with the shared vision of the state government and the coaching staff to leave no stone unturned towards emerging as the country’s leading athletics training facility, talents such as Amlan Borgohain and Dilip Naik are in safe hands to achieve their full potential.