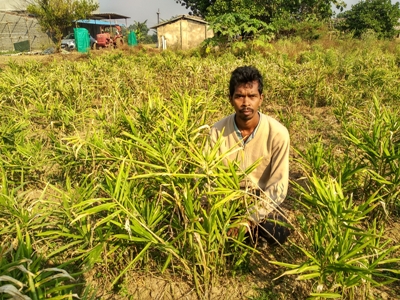 Gatikrushna Pradhan of Shimilihota village under Riamal Block in Deogarh district is known as a successful farmer in his locality. Though he holds an Engineering degree, he preferred to help his father in farming instead of going for a lucrative job that his professional degree could have easily fetched him.

When he started farming 10 years ago, 34-year-old Pradhan could not be very successful as an agripreneur as he followed the same traditional method as his father was following. But being highly educated, he was always on the look for getting higher yield by adopting modern technology and scientific method of farming. What he needed the most was proper and timely guidance; and here came the Reliance Foundation Information Services to help and guide him to the right path to success.

A chance meeting with the Field Representative of the Reliance Foundation at his village during an awareness programme in October 2019 brought significant change in his life and livelihood.

“My five-member family holds 40 acres of farm land, of which 20 acres are used for paddy cultivation, 10 acres for pisciculture and the rest for horticulture. Earlier, we were not earning much profit from farming. But, once I came in contact with the Field Representatives of the Reliance Foundation Information Services and got timely guidance from them on various farm related issues, I could not only manage the business in a better way but also witnessed a significant increase in the profit margin,” said Pradhan.

Reliance Foundation Information Services, through various interactive modes and RF Toll Free Helpline Number 1800 419 8800, has been providing critical information to farmers, fishermen, livestock owners and rural youth to improve their lives and livelihoods. Crucial information such as how to tackle pest attacks on crops; cyclone alerts for farmers and fishermen; or preventive measures against livestock diseases could help safeguard incomes and even lives, Pradhan said adding that he and other people of his locality are reaping benefit from the yeoman’s service provided by the Reliance Foundation.

Citing one incident, Pradhan said that he is using 5 acres of his farm land for banana plantation. During the second wave of the Covid pandemic the plants suffered from Black Sigatoka, a type of fungal disease that results in dark spots on the foliage and reduces production of fruit. At that time the Reliance Foundation had organised an awareness programme on pest control through teleconference. He sought professional guidance from Agri Scientist Mr. Laba Soren of Krishi Vigyan Kendra, Deogarh who advised him on management of the disease. And the professional guidance from Mr. Soren helped him earn Rs 1.70 lakh from banana plantation this year as compared to Rs 60000-70000 he was earning earlier.

Similarly, he could not get much profit from pisciculture as he didn’t have better knowledge and experience in this field. He could get only 40-50 quintals of fish per annum from his ponds spread over 10 acres of land. After participating in various programmes organised by the Reliance Foundation on fish farming, and taking guidance from the experts of the Foundation through interactive modes, now the yield has doubled. So far he has marketed 100 quintals of fish and earned over Rs 13 lakh.

Pradhan and 250 other farmers are now members of the WhatsApp group formed by the Reliance Foundation. They can get immediate solutions to their farm related issues besides advice on pest control, crop management and modern farming from Agri experts through this WhatsApp group.

Thanking the Reliance Foundation and its members and experts from their unflinching support and guidance, Pradhan hoped that he and other members will continue to get such kind of help from the Foundation in future too.

Reliance Foundation Information Services provides validated information services to different livelihood information seekers using modern Information and Communication Technologies (ICT). The diversity of dissemination platforms ensures that anyone and everyone can access the advisories, irrespective of their differential access to technology. This is supplemented by field based outreach as well.