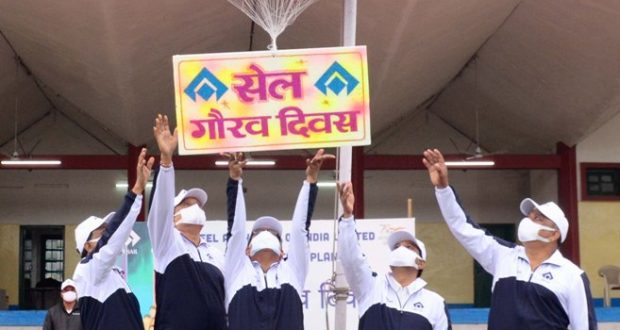 RSP ED (Mines) A K Kundu inaugurated the programme by unfurling the SAIL flag. It was followed by rendering of SAIL Anthem. The ED (Mines) released colourful balloons to the sky as a part of the celebrations and administered the health and fitness pledge.

In the afternoon a cultural programme presented by the employees and their family members was telecast online through various social media platforms. Musical programme ‘Hum Hindustani’, skit ‘ Mera SAIL Mera Garav’, dance to the tunes of the iconic song ‘Rangabati’ and dance drama ‘Ispat Katah Sarita’ presented in a fusion of Odissi, Pala and Dasakathia were the highlights of the programme.

Notably, the SAIL Foundation Day is being celebrated all across SAIL as SAIL Gaurav Diwas to rekindle the sense of pride amongst the employees, ex-employees as well as their family members.

Steel Authority of India Ltd. (SAIL), incorporated on 24th January, 1973, is one of the largest steel-making companies in India and one of the Maharatnas of the country’s Central Public Sector Enterprises. SAIL produces a broad range of steel products at five integrated plants at Bhilai, Bokaro, Durgapur, Rourkela and Burnpur, and three special steel plants at Bhadravati, Salem and Durgapur. The company also has the distinction of being India’s second largest producer of iron ore and of having the country’s second largest mines network.

Since its inception, SAIL has been instrumental in laying a sound infrastructure for the industrial development of the country. Besides, it has immensely contributed to the development of technical and managerial expertise. It has triggered the secondary and tertiary waves of economic growth by continuously providing the inputs for the consuming industry.