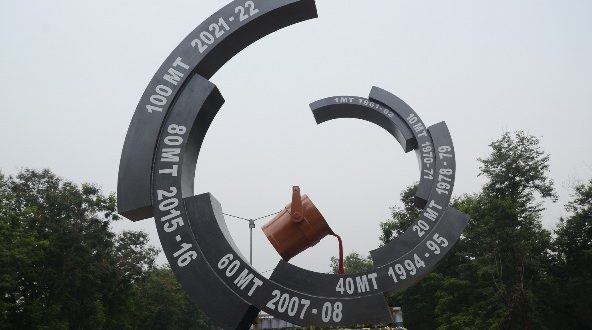 Rourkela Steel Plant (RSP), a unit of Maharatna Company SAIL, surpassed a historic milestone of 100 Million Tonne (MT) Hot Metal production on Monday, thus entering the elite club of Steel Industries with such a distinction. The journey that had commenced on 3rd February 1959, with the then President of India, Dr. Rajendra Prasad commissioning the first Blast Furnace ‘Parvati’, has today entered a higher orbit.

To recall, the last 50 MT hot metal production was achieved in only 18 years.  Moreover, the last 10 million tons of hot metal was tapped in a matter of 2 years 8 months, while the last one year witnessed 4.3 MT of hot metal even with two furnaces operation for few months, which conveys the resilience and very high level of commitment in the RSP Collective.

RSP CEO Dipak Chattaraj visited Blast Furnaces department today along with top management of the Plant, to congratulate the collective for the remarkable achievement. A miniature of the 100 MT monument was unveiled and a ceremonial cake was cut at the BF-5 Control Room, to commemorate the occasion. Thereafter, a helium inflated balloon with the greetings message of 100 MT hot metal production was also floated from the administrative building of the plant, in presence of senior officers, representatives of Trade Unions and Executive Association. In the afternoon, the 100 MT monument on the Ring Road between Sector-2 and Sector-3 of the Steel Township was unveiled by the RSP CEO. Notably, the 4.8-metre high monument weighing 1.6 tonnes has been developed in-house by the skilled collective of Shops Department of RSP. Plates of various thicknesses, produced at RSP, have been used in making of the monument, which depicts the plant’s seven-decade long journey of producing 100 million tonnes of hot metal.

Congratulating the RSP CEO and the entire team for the achievement, SAIL Chairperson Soma Mondal said, “The milestone has been crossed with the help of efforts put in by thousands of people who have contributed directly and indirectly to the growth of the steel plant which had come up in the remote part of state of Odisha more than 60 years back. Today, the steel plant and the city of Rourkela are vibrant and brimming with confidence to reach greater heights.”

Applauding the historic feat, Chattaraj extended hearty congratulations to the RSP collective and exhorted them to achieve 4.5 MT hot metal production in the current fiscal.  The CEO expressed sincere thanks to all stakeholders of RSP including the Central and State Govt agencies, SAIL Corporate Office and other Units of SAIL, the local business and industry communities, suppliers, customers, contract workers, members of the media and the supporting population for being with RSP all along its journey. He also expressed gratitude to Union Minister for PNG and Steel, and SAIL Chairman for their guidance and support all the times.