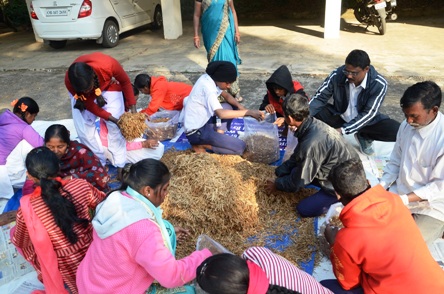 RSP trains over 2000 persons from periphery villages in mushroom cultivation

Besides Vidyakant, more than 2000 men, women and students from periphery villages have been trained in the art and science of mushroom cultivation by the CSR Department of RSP.  Many of them have started their own business and are successful in this enterprise.

“I have got the identity of a mushroom growing trainer and mushroom seed producer not only in my own village but even in the Panchayat and Block level,” says Kamala Toppo of Dalposh Model Steel Village of Rourkela Steel Plant. Toppo, a housewife, had first leant the process of cultivation at the Institute of Periphery Development of RSP; and is training others now.

According to a survey, there is a market for about a quintal of mushroom per day in Rourkela. The profit margin too is quite handsome in this business. Hence, mushroom cultivation was chosen as an important skill development programme by RSP keeping in view the consumption of mushroom in the Steel City and periphery areas and the potential of the market.

Notably, the trained persons have produced about 3000 kilograms of mushroom worth Rs. 2 lakh in a year. At present some of them have taken it up mushroom cultivation in regular business mode while several others are cultivating mushroom on part time basis. Mushroom has also helped in supplementing the family income of agrarian community in the villages and the BPL population of the slums.