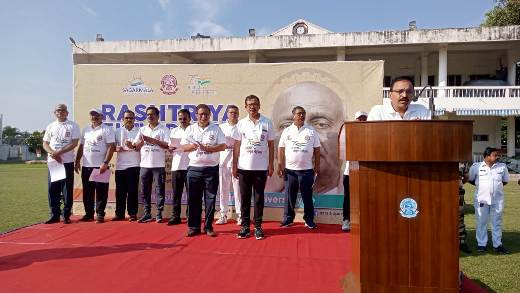 The guidelines, principles and actions of Sardar Vallabhbhai Patel is quite relevant during current times against divisive forces who are trying to create disruption in the country, said Paradip Port Authority (PPA) Chairman PL Haranadh while addressing the employees during the  National Unity Day observance, here on Monday.

The PPA Chairman urged all the employees to follow the same resolve and put their best efforts forward to take PPA into newer heights in the coming days.

Haranadh along with other senior officials of PPA offered floral tributes to Sardar Patel.

The National Unity Day or Rashtriya Ekta Diwas is observed in remembrance of the birth anniversary of “The Iron Man of India” Late Sardar Vallabhbhai Patel who had a major role in the political integration of India. The day provides strength and resilience for the nation to hold on to unity, integrity and security.

In the evening, the PPA Chairman took salute from the platoons participating in a march past by the contingents from CISF Unit of PPA, Odisha Maritime Academy, NCC Naval wing of Paradip College and Port Trust High school.