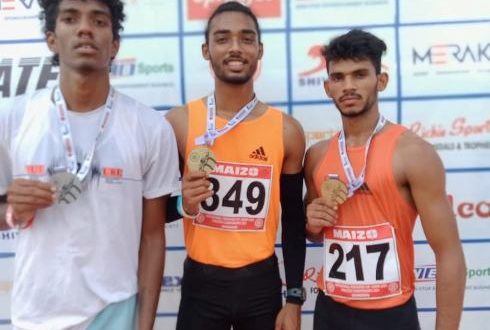 After an impressive performance at the recently held Junior Federation Cup at Sangrur in Punjab earlier this month, 110m hurdler Graceson Jeeva, who trains at the Reliance Foundation Odisha Athletics High Performance Centre (HPC) in Bhubaneswar, is in contention for a spot in the Indian team for the World Athletics U-20 championships in Kenya later this month.

Eighteen-year-old Jeeva won silver at the Meet with a Personal Best (PB) timing of 14.14 seconds, finishing behind Maharashtra’s Tejas Ashok. Earlier, Jeeva had registered another PB of 14.17 in the semi-final, giving James Hillier, Head Coach, Reliance Foundation Odisha Athletics HPC, reason to be pleased with his ward’s impressive progress.

Seventeen-year-old Aryan Ekka was the other standout performer from among the four athletes from the RF Odisha Athletics HPC who travelled to Sangrur for the Meet. Although Ekka didn’t win a medal, he improved his PB in the 200m in each of the three races he competed in, clocking 22.39 seconds in his Round one win, 22.25 seconds in his second place finish in the semi-final and 22.12 seconds in the final, where he finished sixth behind more experienced athletes.

As Ekka will still be eligible to compete in junior competitions next year, Hillier is convinced he too will deliver on his immense potential.

“Graceson has improved by over a second (which equates to roughly a distance of 10 metres) in the short time he has been at the RF Odisha Athletics HPC,” Hillier said. “His progress has been startling and was very proud that he is able to excel positively in the training environment we have created here. Aryan has also improved by a similar margin in the 200m since joining us.  He also competes in the 400m, so we will see which event he has the most potential moving forward.”

With the availability of competitions still limited due to travel restrictions in place in line with Covid-19 guidelines, athletes at the RF Odisha Athletics HPC have been participating in a series of “Performance Graded Races”, a novel concept Hillier introduced last year that follows an open graded structure, where athletes are seeded based on personal bests irrespective of their age or sex.

“Our athletes are now in the competition preparation phase of the year,” explains Hillier. “So, we are now building on all of the qualities such as speed, strength, endurance and co-ordination that have been developed during the off-season. Training is now very specific and is high intensity in nature.”

Currently, 29 athletes are training at the Reliance Foundation Odisha Athletics HPC, that has the stated objective to be among the best of its kind in Asia by 2024. Already athletes from the HPC, that began operations in 2019 as a collaborative effort between Reliance Foundation and the Government of Odisha are achieving success. Sabita Toppo, won two medals at the Junior National championships in Guwahati earlier this year, a gold in the U-16 girls Long Jump and silver in the U-16 girls 80m hurdles, while Rajendra Sidhu, claimed bronze in the 80m hurdles in the U-16 boys category.