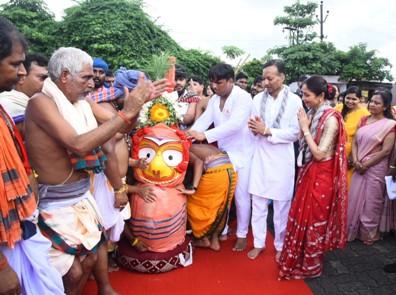 Thousands of devotees from Jindal Nagar and periphery villages on Saturday joined the first ever Bahuda Yatra held at Devbhoomi in Jindal Nagar here.

The chariots of the Trinity – Lord Balabhadra, Devi Subhadra and Lord Jagannath – were nicely decorated to make their return journey from Gundicha Temple to Lord Jagannath Temple at Devbhoomi in Jindal Nagar Township.

The Prime Servitor of the temple and Jindal Steel & Power Ltd. (JSP) Chairman Naveen Jindal joined the Bahuda Yatra and participated in the ‘Pahandi Vidhi ‘and performed ‘Chhera Pahanra’, the symbolic ritual of cleaning the way for the grand chariots before the start of the return journey of the Trinity to main temple of Lord Jagannath.

After performing the ‘Chhera Pahanra’ rituals of all the three chariots, the JSP Chairman wished all a Happy Bahuda Yatra and said, “I pray before Mahaprabhu Jagannath to bless us all with happiness, good health and better fortune. Let there be peace and brotherhood all around.”

All the rituals were done in line with the ritual followed in the Jagannath Temple at Puri. The auspicious day started at 4.45 am with Manima Daka, Dwar Phita (Door Opening) Neeti and Bhitar Shodh Neeti followed by Mangal Aarati, Mailam, Tadap Lagi, Abakash Neeti, etc.

Early in the morning, JSPL Foundation Chairperson Shallu Jindal joined the Mangal Aarati and performed all the pujas at the Gundicha Temple with full devotion under the guidance of the chief priest of the temple.

The Bahuda Yatra also witnessed massive participation of the local community; and large numbers of devotees from Angul and Chhendipada Block pulled the chariots. Devi Subhadra’s chariot was pulled by girls and women with devotion and exuberance.

Now, the deities will stay on their respective chariots for two more days for celebration of Harisayan Ekadashi and Sunabesha on Sunday, followed by Adharpana on Monday. Finally, the much awaited Neeladri Bije, back to Ratna Singhasan, will be ceremoniously conducted on Tuesday in Devbhoomi, Jindal Nagar as per the  the Jagannath Temple rituals.