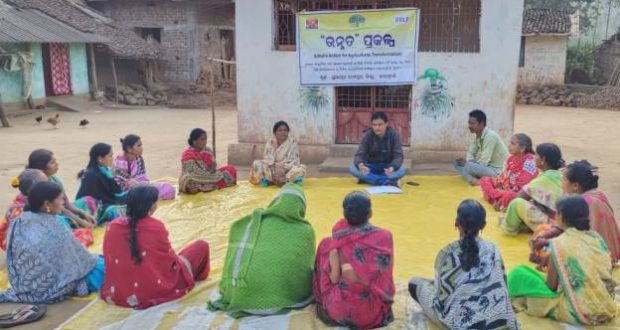 Launched in 2021, UANAT has so far impacted 5000 households of small and marginal farmers through farm intensive interventions.   In Kashipur and Thuamul Rampur blocks, 44 Producer Groups (PGs) have been formed with 5,257 farmers as members. This helps forge community ownership.

Briefing on its economic benefits of the project, Utkal Alumina Unit Head Mazhar Beig says, “Since its implementation, UANAT has enabled generate an average additional annual income of Rs.31,700 per farmer. The earnings from potato cultivation is recorded at Rs.16,000 for every farmer for every season while that of mushroom is Rs.3000 every month. In the last year itself Rs.324.50 lakh have been garnered from various Government schemes and programs at both these blocks.These encouraging results have instilled confidence among the stakeholders.”

“As many as 33 Agri-entrepreneurs have been identified from the operational villages and their grooming and capacity building is under progress. These agri-entrepreneurs will become the catalyst of change and serve the community in various fields like Custom Hiring Centres, one-stop solution for Livestock (vaccine, feed, and equipment), aggregation of agri-produce and its marketing”, avers Beig.

On implementation of the project, BRLF COO Kuldeep Singh says, “To execute the program at ground level, Centre for Youth and Social Development CYSD is working in Kashipur and Janasahajya in Thuamul Rampur as partners to BRLF. Under this project till date, 15 CRLP (Cluster River Lift Point), 7 DBIs (Diversion based irrigations), 7 Canals, 14 Farm Ponds are being converged from Government departments to provide access to irrigation to the farmers to take up multi-crop farming. Poultry, Potato and Mushroom have been promoted as Agri-cluster at Kashipur whereas Onion, Vegetables, Sunflower are emerging as potential agri-production clusters at Thuamul Rampur area. As many as 314 households have been covered under NTFP (Non-Timber Forest Produce) interventions. Siali Leaf cluster development, marketing and value addition of Tamarind are taken as the potential crop for interventions under NTFP. Backyard poultry farming, vaccination of goats are taken as potential interventions under Livestock initiative of project UANAT and as on date 731 families are covered under this initiative.”

In Odisha, the Aditya Birla Group reaches out to more than 5 lakh people touching the lives of over 2 lakh people crisscrossing 128 villages spanning five districts. The Group’s CSR programmes are being driven by Aditya Birla Centre for Community Initiatives and Rural Development Chairperson Rajashree Birla whose vision is “to actively contribute to the social and economic development of the communities in which we operate.  In sync with the UN SDGs our endeavour is to lift the burden of poverty weighing down the underserved and foster inclusive growth.  In doing so, build a better, sustainable way of life for the weaker and marginalized sections of society.”