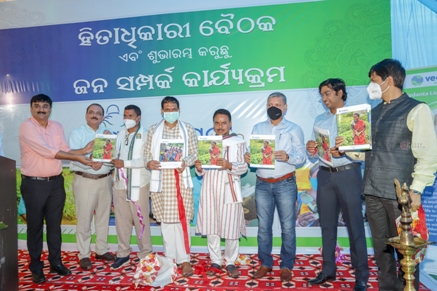 The event was attended by eminent dignitaries from the region, including community leaders, NGO partners, and social workers. The company’s leadership highlighted Vedanta’s renewed vigour towards nurturing meaningful relationships with the community and partnering in their progress, for the progress of the state and nation. Many people from the community also shared their views and suggestions on the occasion and acknowledged Vedanta’s contribution to Kalahandi and Rayagada districts.

Speaking on the occasion, Vedanta Ltd. Deputy CEO-Alumina Business, GG Pal, said,“We truly believe that industries can become harbingers of socio-economic prosperity in the regions where they operate. Vedanta’s community welfare initiatives are aimed at improving the quality of life of our local communities. We believe that the true purpose of our business is to give back to our communities and to the environment that nurtures us. Our Jan Sampark Karyakram is another step forward in that direction; and seeks to foster stronger relationships for the progress of both the local populace as well as the company.”

During the programme, the company also shared contact details and schedules of visits of the company’s ‘Jan Sampark’ Nodal officers to the villages in its vicinity and beyond, to proactively foster greater connect with the people.

Addressing the gathering, Lanjigarh MLA Pradeep Dishariappreciated Vedanta’s contribution in the field of employment and for creating a state-of-the-art COVID Hospital in Bhawanipatna. He further said, “I request the local community members to extend their support towards Vedanta and the initiatives taken by the organization for growth and development of the region.”

“I acknowledge Mr. GG Pal’s efforts of visiting numerous villages and understanding the residents’ concern and expectations from Vedanta,” said former Lanjigarh legislator Balabhadra Majhi while appreciating the company’s CSR initiatives for the welfare of the people living in the plant periphery.

The event culminated with gifting of mementos such as tribal art paintings created by local women artisans supported by Vedanta Lanjigarh, to the dignitaries and small celebratory tokens sending them best wishes for the upcoming festivities on behalf of Vedanta.

Unveiled at the event, Vedanta Lanjigarh’s CSR Annual Report for FY2020-21 highlights the company’s community development endeavours, which impact the lives of over 50,000 people annually, such as:

Vedanta is the largest producer of aluminium in India and remains the premier manufacturer of metallurgical grade alumina. The company operates a 2 MTPA (million tonnes per annum) capacity alumina refinery at Lanjigarh in Kalahandi district of  Odisha since 2007 and an associated 90 MW captive power plant. With its world-class Aluminium Smelters, Alumina Refinery and Power Plants in India, the company fulfils its mission of spurring emerging applications of aluminium as the ‘Metal of the Future’ for a greener tomorrow.