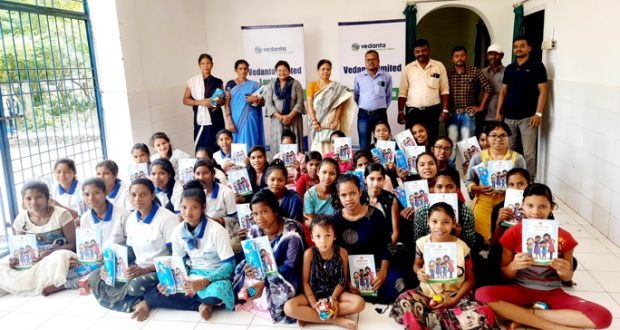 Despite being a natural bodily process, menstruation and conversations around it continue to be viewed as a social taboo in many quarters. This affects the ease with which women in India can access safe hygiene products, restricting their personal freedoms and affecting their wellbeing, especially in rural India. Held year on year, the company’s menstrual health awareness campaign brings together members of government, medical professionals, Anganwadi and ASHA workers, as well as community leaders to sensitize the menstruators on these issues.

Jyotsna Rani Mishra, Lady Supervisor – ICDS, and Dr. Charubala Sahoo, Obstetrics and Gynecology Specialist at Vedanta Hospital in Lanjigarh, shared their experiences and knowledge with the participants of the awareness session along with frontline health workers. Comics in Odia language, containing comprehensive information about menstruation, were distributed to the women and adolescent girls, along with free sanitary pads. The participants were also provided information on the safe disposal of used sanitary pads to avoid the spread of any communicable diseases.

Speaking about the company’s health interventions, GG Pal, Deputy CEO, Vedanta Limited – Lanjigarh said, “It is essential that discussing menstruation stops being viewed as a taboo and accepted as a normal biological process that has an important bearing on a woman’s health and well-being. Through targeted interventions on women’s health, Vedanta Aluminium is playing a significant role in helping rural women make healthier and safer choices. Ensuring the health and well-being of local communities is an important pillar in our community development endeavours, and we have a multitude of initiatives to this end including the Vedanta Hospital, Mobile Health Units, Health Camps and more.”

Speaking on the occasion, Dr. Charubala Sahoo, Obstetrics and Gynaecology Specialist, Vedanta Hospital, said: “Menstruation is an important aspect of a woman’s development and directly influences her physical and mental wellbeing. It is therefore, a concern that taboos surrounding menstruation continue to exist even today. As a society we have a collective responsibility to tackle the misconceptions that prevail as only then can we call ourselves a truly developed nation. This campaign has been an effort towards this goal.”

The Vedanta Hospital is a state-of-the-art multispecialty facility at Lanjigarh in Kalahandi district, provides medical care to 60,000 residents from nearby villages.

Vedanta Aluminium Business, a division of Vedanta Limited, is India’s largest manufacturer of aluminium, producing half of India’s aluminium i.e., 2.26 million tonnes in FY22. It is a leader in value-added aluminium products that find critical applications in core industries. The company operates a 2 MTPA (million tonnes per annum) capacity alumina refinery at Lanjigarh in Kalahandi district of Odisha since 2007 and an associated 90 MW captive power plant. With its world-class aluminium smelters, alumina refinery and power plants in India, the company fulfils its mission of spurring emerging applications of aluminium as the ‘Metal of the Future’ for a greener tomorrow.