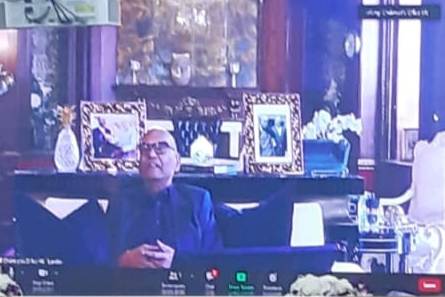 For the first time, 18 eminent personalities of different fields starting from social work, sports, art, architecture, classical dance, music, academia, industry and technology have come together under the forum “Odisha First”, supported by Vedanta Limited, to promote Odisha in their respective domain.

The forum, under the chairmanship of globally acclaimed flautist and Padma Vibhushan awardee Pandit Hariprasad Chaurasia, will function as a think tank to generate various ideas and action plans by practicing professionals. These ideas and action plans will be presented to the government, corporate bodies and autonomous institutions for their support for implementation, said the Convenor of the forum Tapan Kumar Chand.

Chand who is also President and Resident Director of Vedanta Ltd. said the forum will periodically meet and invite top dignitaries of the country to participate in the deliberation and extend support for implementation of the action plan.

Inaugurating the first meeting of the forum through virtual mode on Friday, Vedanta Limited Chairman Anil Agarwal complimented the efforts of Odisha First’s celebrity personalities for their initiative for the cause of Odisha, while assuring that Vedanta would continue to partner in the growth and development of the State.

He also promised that Vedanta would consider the initiatives as suggested by the forum for the progress of Odisha in socio-cultural, health, education and sports fields.

“Odisha is the land of great cultural heritage and opportunities for all, be it industries, tourism, sports, arts or start-ups. Odisha has some unique advantages compared to all other states – strategic location, abundant natural resources, a government committed to development, and such talented people! I consider myself and our entire team at Vedanta to be an integral part of the Odia family,” said Agarwal.

Narrating his personal experience, the Vedanta Group chief who had earlier announced that he would donate 75 percent of his family wealth to charity, further said that he came to Odisha to set up industries in the most backward districts like Kalahandi at the behest of Late Biju Patnaik.

Appreciating Odisha Chief Minister Naveen Patnaik for giving a stable government with high standard of governance, Agarwal said that more voluntary participation of successful people in the growth and development of the state, will expedite the process.

Making a detailed presentation on Vedanta’s work in Odisha, Vedanta Limited CEO – Aluminium Business, Rahul Sharma said, “Believing in Odisha’s potential, 20 years back, our Chairman took the landmark decision of setting up a world-class industrial ecosystem to make Odisha the ‘Aluminium Capital of the World’. And today, I am proud to say that Vedanta has been a partner in Odisha’s development for nearly two decades. Odisha is poised to be a trillion-dollar economy in this decade and Vedanta is a committed partner in this journey. Be it education, healthcare, livelihoods or infrastructure, Vedanta has bolstered the state’s efforts to bring prosperity to the remotest parts of the state.”

Speaking on the occasion, Odisha First Chairman Pandit Hariprasad Chaurasia said that Odisha has now become a land of happenings and opportunities. “We thought this land has given us enough, we have been promoting this land, now we will promote it together,” he added.