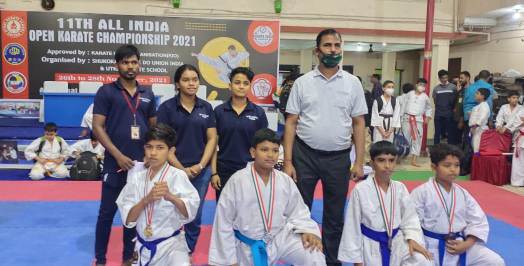 Congratulating the students, GG Pal, Deputy CEO – Alumina Business, Vedanta Ltd., said, “It is heart-warming to see our initiatives helping children, not only in the field of education, but also in the field of sports. On behalf of the Vedanta family, I extend my heartiest congratulations to these bright and enthusiastic architects of tomorrow and wish them all the very best for their careers. May they continue to shine on the path to excellence!”

Elated with the performance of the students, Sadanand Hota, Principal, DAV Vedanta International School, Lanjigarh, said, “I am very proud of the achievement of all the students. I wholeheartedly thank Vedanta for enabling the students to showcase their skills at such a significant platform. My heartiest congratulations to the students and their coach for their astounding performance.”

Vedanta established Lanjigarh’s first English medium school – the DAV Vedanta International School, well-equipped with state-of-the-art infrastructure and facilities like smart classrooms, modern computer, science and mathematics labs, multimedia room, a well-stocked library, etc. to fuel the inquisitiveness of the growing children. More than 1,200 students, majority of whom are from local communities, study in the school today. This school has created an aspiration for quality education among local communities which is reflected in the rise in literacy levels in Kalahandi from 38.4 per cent in 2001 to 60 per cent in 2011. Under its education program, Vedanta Lanjigarh has also been facilitating training for school students in extra-curricular activities such as Karate and Archery.

Vedanta is the largest producer of aluminium in India and remains the premier manufacturer of metallurgical grade alumina. The company operates a 2 MTPA (million tonnes per annum) capacity alumina refinery at Lanjigarh in Odisha, since 2007 and an associated 90 MW captive power plant. With its world-class Aluminium Smelters, Alumina Refinery and Power Plants in India, the Company fulfils its mission of spurring emerging applications of aluminium as the ‘Metal of the Future’ for a greener tomorrow.