Breaking News
Home > Business > We stand testimony to what is possible if you make in Odisha: Vedanta Resources Chairman 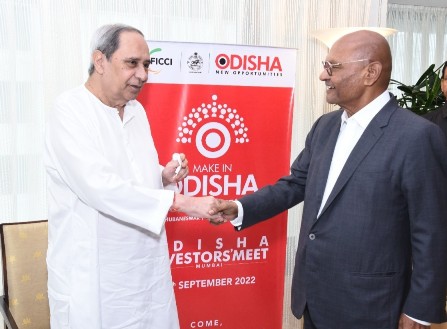 We stand testimony to what is possible if you make in Odisha: Vedanta Resources Chairman

“We (Vedanta) stand testimony to what is possible if you make in Odisha. It is amongst the most favourable investment destinations in India, ably led by the stable governance, leadership, and vision of Shri Naveen Patnaik Ji which is reflected in the state’s Ease of Doing Business rankings,” said Vedanta Resources Chairman Anil Agarwal while speaking about Vedanta’s partnership in the progress of Odisha.

The Vedanta Resources chief called on Odisha Chief Minister Naveen Patnaik on Wednesday on the sidelines of ‘Make in Odisha–2022’ roadshow being organised here by the Odisha Government.

“Single window clearance system, 5T framework, focus on infrastructure projects, etc. have increased the investor community’s confidence in Odisha. And it is on account of this, that we have new investments of more than Rs 25,000 crore in line for expansion of our aluminium, ferrochrome and mining business, which will create more job opportunities and revenue for the state,” said Agarwal.

“We are also setting up one of the largest Aluminium Parks near our Jharsuguda smelter to boost the domestic aluminium downstream ecosystem. It heartens us to see our investment in Jharsuguda turn the district into a vibrant industrial hub with an airport. Odisha’s rich culture, technically skilled manpower and natural resource sectorhave contributed significantly to boost the GDP of the nation,” he added.

The Vedanta Resources chief further said that beyond business, the Company is in the process of establishing 650 Nand Ghars, which would benefit more than 5 lakh women and children with interventions in education, nutrition, healthcare and skill development. This would be in addition to Vedanta’s 360-degree community development programs in hundreds of villages.

The Vedanta Group has made its single largest investment in Odisha till date, in aluminium manufacturing value chain, ferrochrome, mining and value-addition, to the tune of Rs 80,000 crore. With this quantum of investment, Vedanta is contributing nearly 4 per cent to Odisha’s state GDP through its direct and indirect operations. The company has also created over 5 lakh livelihood opportunities and fostered hundreds of MSMEs in the state.

Vedanta’s aluminium smelter at Jharsuguda is the world’s largest single-location aluminium smelter (ex-China), and the only Indian smelter in the global ‘1 Million Tonne’ club. It is the first Indian metals producer to manufacture low carbon aluminium, branded ‘Restora’, for customers worldwide. The world-class alumina refinery at Lanjigarh in Kalahandi district feeds the company’s aluminium smelters. Ferro Alloys Corporation Limited (FACOR), a subsidiary of Vedanta, is one of India’s leading producers and exporters of ferro alloys; and contributes 8 per cent of India’s chrome ore production. These large-scale national assets have significantly strengthened the socio-economic fabric in the regions where they operate.

Vedanta has reduced Odisha’s power deficit by 10 per cent over the past decade, by supplying about 20 billion units of electricity to alleviate acute power shortage.

Vedanta established Kalahandi’s first English medium school, the DAV Vedanta International School, which supports 1200 students, 90 per cent of whom are from local communities. This school created an aspiration for quality education among local communities, which is reflected in the rise in literacy levels in Kalahandi. It also partnered with the Odisha Government’s ‘Mo School’ program to augment the infrastructure in rural schools and enable children’s access to high-quality education.

The Company created a vibrant rural women’s co-operative called ‘Subhalaxmi’ in Odisha, which has over 4100 women members today, who are engaged in various enterprises like farming, tailoring, fabrication, poultry, etc. It also revived age-old artforms like Dhokra and Saura, and nurtured tribal sports like archery, at grassroots.

Vedanta Hospital, a 20-bed state-of-the-art medical facility at Lanjigarh, attends to over 60,000 people visit the Vedanta Hospital every year. Free of cost healthcare services by Vedanta Aluminium and awareness campaigns have helped decrease the prevalence of malaria in Kalahandi as well.