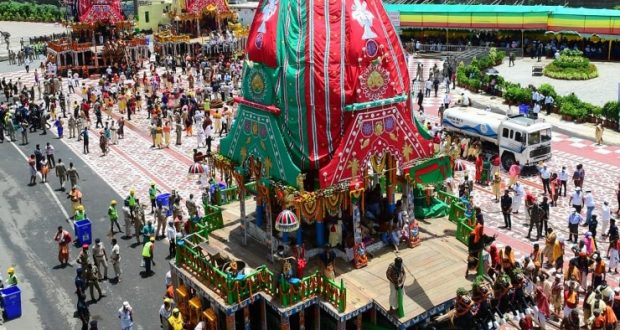 The world famous annual car festival (Rath Yatra) of Lord Jagannath got underway without devotees for the second year in a row in the pilgrim city of Puri on Monday.

The colourful chariots of the Trinity – Lord Balabhadra, Lord Jagannath and Devi Subhadra were pulled from Lion’s Gate to Gundicha Temple by the servitors amidst beating of cymbals, blowing of conch and chanting of ‘Hari Bol’ with strict adherence to COVID-19 protocols as the entire coastal town was placed under curfew.

The three chariots reached Sharadhabali of Gundicha Mandir well before the sunset. Taladhwaja, the majestic chariot of Lord Balabhadra, was the first to reach at Sharadhabali, followed by Dvi Subhadra’s Darpadalan and Lord Jagannath’s Nandighosh.

The 3-km stretch of the Grand Road in front of Shree Mandir wore a deserted look as only some selected servitors and police personnel were allowed to participate in the annual festival.

Only those servitors, police personnel and officials who have tested negative for COVID-19 have been allowed to take part in the annual sojourn of the Trinity, Puri Collector Samarth Verma said.

Earlier in the morning, the deities – Lord Sudarshan, Lord Balabhadra, Lord Jagannath and Devi Subhadra –were taken on ‘Pahandi’ from Ratna Singhasan of the Shree Mandir to their respective chariots.

After the deities were seated on the chariots, Gajapati Maharaja Dibyasingha Deb performed the ‘Chhera Panhara’ (sweeping of chariots) ritual with a golden broom, following which Jagatguru Shankaracharya of Govardhan Peeth, Swami Niuschalananda Saraswati, had a darshan of the deities as per the tradition before the pulling of the chariots.

‘Taladhwaja’ was pulled first by about 500 servitors, following which ‘Darpadalan’ and ‘Nandighosh’ started rolling on the Grand Road, Puri.

Elaborate arrangements were made by the administration for smooth conduct of the Rath Yatra.

The state government has made elaborate arrangements for free live broadcast of the festival for devotees across the country.