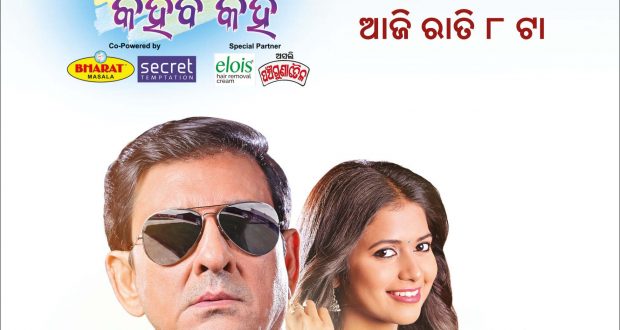 The serial will be aired in the prime slot, 8-8:30 pm from Monday to Saturday.

Produced by Akshay Parija Production and directed by noted film director Sushant Mani, the show has a perfect blend of romanticism, mystery and thrill.

The concept of “Kemiti Kahibi Kaha” wheels around the unconventional love story of a couple belonging to different generations; and stands as a witness to the love that surpasses materialistic limits of age, status and lifestyle to prove the purity in love between two individuals.

The show has the biggest attraction by featuring one of the greatest Odia actors ever, Siddhant Mohapatra in the lead role. Supriya Nayak, the popular actress in Odia entertainment industry, will be seen as the lead actress in the mega show.

Commenting on his comeback on television screen, Siddhant Mohapatra said, “What drew me to this daily fine art series was its unconventional storyline and an unexplored character sketch it was offering me to delve into, as an actor. In this New Year, I wanted to connect better with my viewers and bring smile on their faces with this new project.”

“It feels great to be a part of ‘Kemiti Kahibi Kaha’ show especially working with the talented Siddhant Mohapatra, Sushant Mani and the Zee Sarthak team. I am very happy for the fact that I will be a part of the viewers’ lives on a daily basis, trying to bring happiness through our story. I am sure the audience is going to love the show,” said lead actress Supriya Nayak.

Speaking on the show, Arghya Roy Chowdhury, Business Head of Zee Sarthak, said, “Kemiti Kahibi Kaha will be the first mega daily soap launch of the New Year setting the benchmark high for the fiction shows in the Odia entertainment industry. We are sure that the audience will love the chemistry between our lead actors Siddhant Mahapatra and Supriya Nayak on screen.”